Curious to know where we came from? 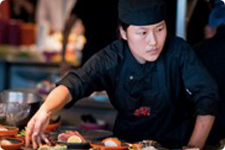 Founded in 1997, YO! Sushi brought the concept of a Japanese ‘kaiten’ sushi bar that delivered food to customers via a conveyor belt travelling 8cm per second to the masses, and became the original and most famous sushi brand in the UK. YO! Sushi was a brand new concept in dining and catapulted Londoners into the 21st century which made us the most talked about dining experience. Our customers queued around the block as we gave the capital a slice of Urban Tokyo. The experience was fun and exciting, whilst the food was revolutionary and made lovingly, as AA Gill (Sunday Times) pointed out in his review stating it was “the best sushi in London" and Fay Maschler (Evening Standard) said she had “seen the future and it is fun". 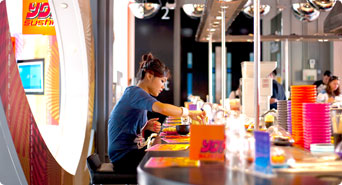 By 2001, YO! Sushi was the market leader in sushi restaurants and (we like to think!) inspired supermarkets to start selling packaged sushi to the Great British Public, allowing people in areas where YO! Sushi restaurants hadn’t arrived yet to take their first steps in discovering how tasty and healthy sushi can be.

To this day, YO! Sushi’s dishes are freshly prepared in our restaurants daily by our nifty kitchen ninjas, whether to dine in, for takeaway or delivery. Although sushi is at the heart of our concept and brand, you can choose from over 80 Japanese inspired items, including delicious soups, rice or noodle-based dishes, salads, tempura and even hot classics like Chicken Katsu Curry, Salmon Teriyaki or Yakisoba noodles (some of our best sellers).

For the past 11 years YO! Sushi has been led by our CEO, Robin Rowland and with the help of our leadership team, we’ve grown from a London-only sushi brand to an international iconic success with over 60 restaurants worldwide. YO! Sushi is privately owned by Quilvest and the YO! Sushi senior management team in the UK, and we work with the very best franchise partners to bring YO! Sushi to locations internationally.

We serve over 3.5 million customers a year throughout the UK and across the globe in Dublin, Sintra, Dubai, and Kuwait … phew, now that’s a lot of maki rolling!